An Evening with Hannah Kaminer (Trio) 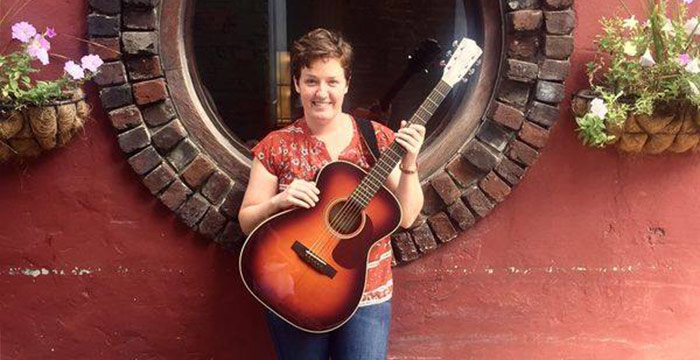 “I was instantly drawn into the warmth and purity of Hannah’s music. Her songwriting lacks pretension. It is easy to hear the truth in it. Her voice is totally her own, there are no forced notes or false twang. The world needs more of this.”

Hannah Kaminer is a folk/Americana artist based in Asheville, NC. Raised in small towns in western North Carolina, she fuses echoes of Appalachian traditions with wistful, Americana-style songwriting. Her clear, yearning voice and silvery melodies are a haunting pairing with gutwrenching lyrics about loss, love, and home.

She began to perform in 2014 after she entered Asheville’s citywide Brown Bag songwriting competition in 2013, winning both Grand Prize and Crowd Favorite. Following a warmly received homemade EP (“Living Room Recordings”), in 2014 she ran a Kickstarter campaign for her first studio album, “Acre by Acre,” which was recorded with Julian Dreyer at Asheville’s Echo Mountain Studios and released in March 2015. In July 2015 she was invited to the Harrison Center for the Arts in Indianapolis, IN, for their 48-Hour Songwriting Residency. You can listen to her song about city revitalization here.

In December 2016, Kaminer received a Regional Artist Project Grant to assist in funding her sophomore project, a full-length studio album. She ran a second Kickstarter campaign in May 2017 to complete the funding, and the new album, “Heavy Magnolias,” was released in March 2018 at the Grey Eagle in Asheville.

Kaminer was named a finalist in the 2019 Chris Austin Songwriting Contest at MerleFest with her song “Don’t Open Your Heart.” She currently performs solo and with her full band around western North Carolina and the Southeast.