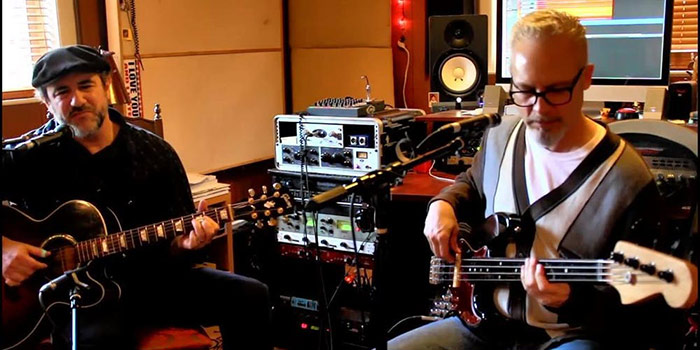 Jon Shain had the good fortune to learn directly from a number of NC’s older blues players, and became a member of Big Boy Henry’s backing band. He got his start playing his own music with old area favorite roots rockers Flyin’ Mice. Jon was a finalist (along with FJ) in the 2009 International Blues Challenge in Memphis and the 2008 and 2018 winner of the Triangle Blues Society’s Blues Challenge and 2006 winner of NC’s Indy award for Best Folk Act. He has shared stages with the likes of Keb’ Mo’, John Hiatt, and Jackson Browne.

FJ Ventre and Jon began playing music together in 1982 when they met in high school. FJ went on to University of Massachusetts-Lowell, earning a B.A. in Music Performance and Sound Recording. He remained in the Boston area, performing in the city’s vibrant music scene. Since relocating to Chapel Hill, NC in 2000, Ventre has performed with his own group The Swang Brothers, as well as Chris Stamey, Rebecca and the Hi-Tones, and Wyatt Easterling. In addition to performing as a sought after sideman, he spends his time behind the mixing board, engineering at his own Good Luck Studio and operating his graphic design firm Tadpole Designs.

Shain and Ventre are promoting their new album, Tomorrow Will Be Yesterday Soon.