An Evening with Laura Rabell 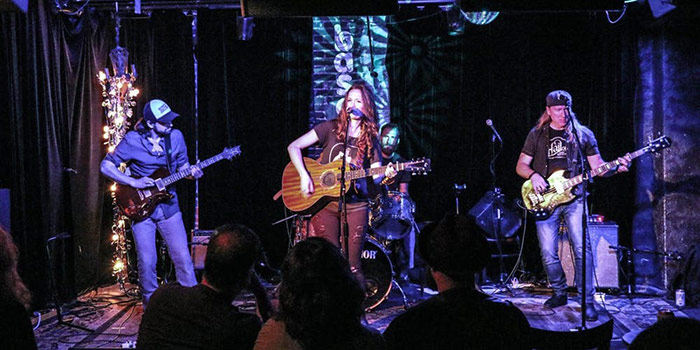 Music has always been an innate catalyst for Laura Rabell. From singing at the top of her lungs in her ’96 Chevy Cavalier to the first time she recorded at Blackbird Studios, Rabell knew that music was meant to be part of her life. Although her 9-5 life in Charlotte, NC, was devoted to a career in marketing, Rabell’s desire and love for music didn’t go away. So she took a leap that so many others wish they could, ditching corporate America for Americana.

Since relocating to music city, Rabell’s proven herself worthy as one of Nashville’s rising songwriters – she’s got a song to sing, but more importantly, a story to tell.

Rabell doesn’t shy away from exploring the dark side of life and love in her music and is currently working on her first full-length album, Ghostlands. Set for release in 2018, the album combines her literary depth and Southern Gothic perspective with the complex sounds of Nashville Americana.

After hearing a song she wrote, titled “Old Rag,” the unrelenting, unapologetic romp of a woman scorned, one of Laura’s songwriting mentors quipped that the song was “…like Loretta Lynn singing a Johnny Cash song on acid,” …which she takes as a compliment.

“…like Loretta Lynn singing a Johnny Cash song on acid.”

“I’ve always loved to sing as long as I can remember,” Laura says. “And I was drawn to the piano as a little kid, even before I knew how to play. My parents decided that I should take piano lessons – probably for their own sanity. It wasn’t a very pleasant noise,” she recalls with a laugh.

Growing up in the Florida panhandle, she was influenced by a little bit of everything. From Soundgarden to the Dixie Chicks – if it was on the radio or could be scrounged up from her older brother’s CD collection, Rabell was all ears. From a young age, she showed interest in music; experimenting with everything from the living room piano, the violin, flute, and percussion. As she matured, she took on an active role in Pensacola’s arts community, performed regularly with a local choir, and landed roles in multiple theatrical productions.

In school, Laura always gravitated towards poetry and loved reading Shakespeare and mining all of the many metaphors and other poetic devices buried in the text like hidden treasures. She nursed her love of literature throughout college and graduated from the University of West Florida with a degree in Humanities, concentrated on English & the Arts.

But it wasn’t until her move to Charlotte that she got the spark needed to galvanize her latent musical drive, “I went several years without doing anything musical except singing in my car. It really felt like a void in my life that needed to be filled, but I had no idea what to do about it. Until I discovered the guitar. The guitar changed everything for me,” she says. Learning to play the guitar and pen original songs opened up a whole new world of possibilities by fusing all of her seemingly disparate passions – music, writing, performing and poetry – into one.

“The guitar changed everything for me.”

She’s always had the will, now she’s finding her way. Ten years after moving to Charlotte, Rabell packed up – with guitar, husband E.J., and dog Rusty in tow – and headed to Nashville.

On any given week, when she’s not traveling, you can find Rabell playing somewhere in Nashville, including iconic spots like Bobby’s Idle Hour, The Basement, and Dee’s Country Cocktail Lounge. She feels most alive when performing her own songs for an engaged audience and most at home swimming in the poetic lyrics of other songwriters that she admires. “As a songwriter who is just getting started in my career, trying to figure out what makes a song good or even great, it’s inspiring to be surrounded by such great role models and to feel like I’m not alone on the journey.”

For Rabell, that journey is paved with songs full of meaning. “I believe that songs are powerful. Songwriting can solve problems. Through the gift of song, I can choose to add levity and hope to a tough situation. Even if it’s only for three fleeting minutes, a song can balance the scales of justice and give a voice to the voiceless,” she says.

In addition to working towards her debut album for 2018, Rabell chronicles her adventures in a monthly email newsletter. You can follow along by subscribing at laurarabell.com/mail.